Streghts and Overview:
Royal Challengers Bangalore: Virat Kohli the captain of Bangalore team will lead his side from the front in this edition too. Since the captain is having a run feast in this calendar year, he would only want to carry on from where he left in the last game in T20 world cup against West Indies. The team is packed with local and international talents. The top four is a nightmare to any opponent in this format. It ranges from Chris Gayle, AB de Villiers, Shane Watson and the atta boy Sarfaraz Khan. The batting department is a powerhouse like always and this time seems invincible with the captain in full swing. Talking about their bowling unit, they are fairly balanced with the pace attack of Adam Milne, Kane Richardson and David Wiese. In middle overs Stuart Binny and Shane Watson would be crucial too for the side. Samuel Badree will be their main threat to the opponent but he is likely to miss this game and few more because of his injury. Another big blow for the Bangalore as their star bowler Mitchell Starc will not play a single game in this year's edition because of his injured leg. 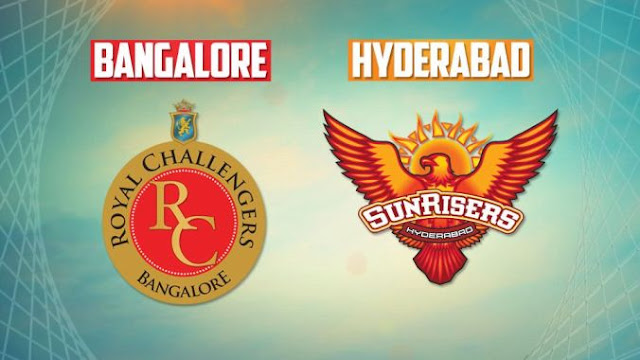 Sunrisers Hyderabad : David Warner will take care of the proceedings of the Hyderabad team as a captain. The team is a bunch of natural talent and with his guidance and experience will harness it better as they show potentials and are a match winners on a given day. The opening duo in Shikhar Dhawan and David Warner shall be key just like the last year edition as they play fearless cricket in the Powerplay and set the mood for the up coming batsmen to finish big. Aditya Tare, Naman Ojha, Eoin Morgan and Moises Henriques are certainly those hitters who can play fiery strokes toward the end of the innings and set a challenging total. Kane Williamson will surely add value to this side with his super talent and attacking instincts. Yuvraj Singh who has played well lately might have to miss a few games because of injury and his return to the side shall make merry for the Hyderabad. In the bowling unit, Ashish Nehra, Trent Boult, Mustafizur Rahman, three southpaws can be a great contest for any batsmen as they bowl fast, cutters, inswing, outswing and serious length balls. Seeing them shall generate a real contest between bat and ball. Let us all see, who emerge victorious in this heavyweight clash. On one side we have three genuine batsmen who play extraordinarily in this format. Virat, Gayle and AB. On the other side three southpaws who are fast and clever. Nehra, Mustafizur, and Boult.