Posted/Updated on April 09, 2016
by Srinivasa Rao M
After hosting the 2016 World T20 final, the crowd at the Eden Gardens is now ready to cheer up their home team as the clash is between Kolkata and Delhi. 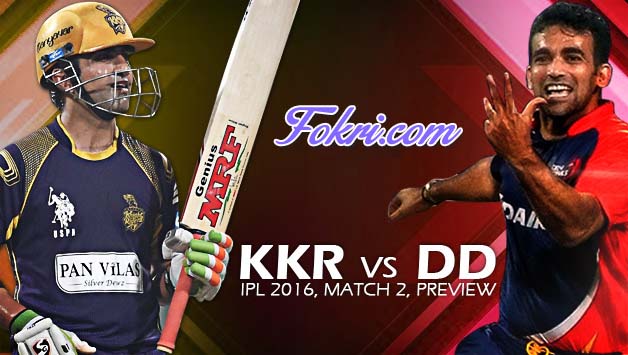 Strengths:
Kolkata is the team with the ability to win matches at a stretch and can upset the top teams by silently climbing up the point table. Gautam Gambhir has led his team superbly which helped them to achieve the title twice in 2012 and 2014 respectively. Kolkata are a perfectly balanced team in all the departments and have a good combination of local and foreign players. The batting line-up does have some lusty blows in Andre Russell, Shakib Al Hasan, Yusuf Pathan. Also, the local batsmen like Uthappa and Manish Pandey are very supportive and can play winning knocks. But the bowling department is their main strength as they have some legends of spin in Narine, Hogg and Piyush Chawla. KKR's pace attack is not weak either. Umesh Yadav, Russell and Morne Morkel are lethal strike bowlers. If we look at the previous stats, Kolkata has only lost one match in their hometown in the last two seasons and this may be a reason to worry for their opponent.


Delhi team have not been playing impressive cricket in recent years. They have been over experimenting by changing players which lacked the consistency. This season they do not have big names in their team, but they do have effective players. This time, pace bowler Zaheer Khan will head the Delhi team. He is the player of great caliber and being a veteran, he might be a good choice for the captain. Under Zaheer's captaincy, there are players like JP Duminy, Quinton de Kock, Karun Nair, Pawan Negi and Carlos Brathwaite, who have proven their abilities in the recent past to take the team to victory. This season Delhi's batting line-up is not that explosive but decent. In comparison, the Delhi bowling department is stronger than batting. Their main weapon is the spin duo of Imran Tahir and Amit Mishra, who can bring any batsmen on their toes. Particularly when they are on song, they can turn the tables and emerge as a match winner. The spinners are well backed by the aggressive pace attack in veteran Zaheer Khan, Mohammad Shami, Nathan Coulter-Nile and Chris Morris. If the batsmen fail to display outstanding performance by the willow, their bowlers have the talent to manage it by the leather. It will be very challenging for Delhi to beat Kolkata as they are best in their home ground. Delhi will have to emerge as a promising team in their first match as they now have Rahul Dravid as their mentor which will be helpful for them in building strategies.


Toss: Kolkata Knight Riders have won the toss and have opted to field